Last week I saw a friendly football match between England and Czech Republic in Wembley. The only last name was important for me. The Wembley! I don't care too much about football. But opportunity to see Wembley was really exciting. To see Wembley is something like to visit Mecca of England's football. So first, many thanks to my boss Steve, for invitation. Wembley is about three hours driving from Nottingham plus a half an hour of finding a free and "cheap" place for parking. The stadium is huge with massive arch over it which is very good visible. Over 69000 fans were there but we didn't have any problem to get inside. 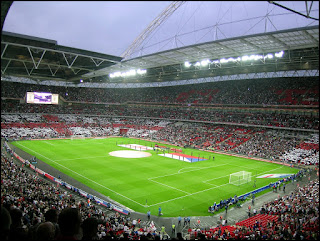 Stadium background is full of fast foods, restaurants, beer points (unfortunately only Carlsberg "lemonade" was there ;-). The space inside of stadium really surprised me. The pitch has been excellently visible and if we missed any important situation we could see it again on two big screens on both sides. The Match was not so bored as I expected. Czech team played very well and Czech fans were more active than English fans. So, sometimes I felt myself like in Czech Republic. I was a little bit disappointed at the end of the second half when more than 1/3 of English fans left their seats ten minutes before the end and the stadium started to look empty. However they missed England's second goal. Finally draw 2:2 wasn't bad for both teams and everybody was happy. You can see photos.
Vystavil Unknown v 17:18