Last weekend we were in North Wales with Petr's colleagues from his company to make their first training on Three Peaks Challenge. They want to make that challenge for charity this Jun and to climb Snowdon was a one part of their preparation. You can see in here, what exactly Three peaks Challenge is, but don't do any mess with Twin Peaks. It is completely different story. However, if I could compare Twin Peaks scene with Llanberries Royal Legacy Hotel where we stayed overnight it would look the same. When we made a plan to climb Snowdon we chose the Lanberries path for ascent and Miner's track for descent. Petr had worried about the weather, but amazingly the weather was unbelievable dry and only on the top of the summit was a really strong wind, which made temperature below zero. All members of our group reached the top except Kerry and Adam who set apart from us immediately on the beginning of the trip. The top of the summit has been full of tourists so we quickly finished a lunch and started to descent. Our group has split into two. We chose alternative way down followed by Jez and Stew. The others returned the same Llanberies path as we climbed up. Our Pig's trail was more enjoyable than Llanberies one and after one hour we reached Pen-y pass. Unfortunately we neither meet nor eat any pig during the way down. May be next time. We used a shuttle bus from Pen-y Pass to Llanberies. It's quite cheap and quick, but...! Petr always tries to do something funny and exciting. That time he forgot a digital camera inside the bus. So we had to wait about a half an hour for the returned bus. Fortunately the camera was on the back seats and you can see pictures from it Snowdon. The night in Legacy Hotel was full of beers and entertaining games. Petr doesn't exactly remember all, but it was quite funny. Our room was not too faulty so we could have a shower or switch the light without any problems. The others weren't so lucky :-). Next day we did another climbing trip to see Glyders. 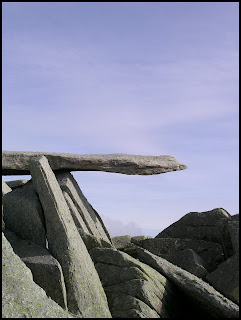 Glyders that are the peaks on the opposite side of Mt. Snowdon. Nobody joined us. It was a shame because the weather was even more beautiful than the day before and the top of Glyders was full of boulders with weird shapes and angles. One of the most exciting parts was Devil's kitchen where we nearly spent an hour just to make some pictures. Silvie had a feeling that we have to meet Gordon Ramsey in there. If he came there, he would say: Snowdon - DONE!
Vystavil Unknown v 11:53